Will no man know the day or hour of the Second Coming? 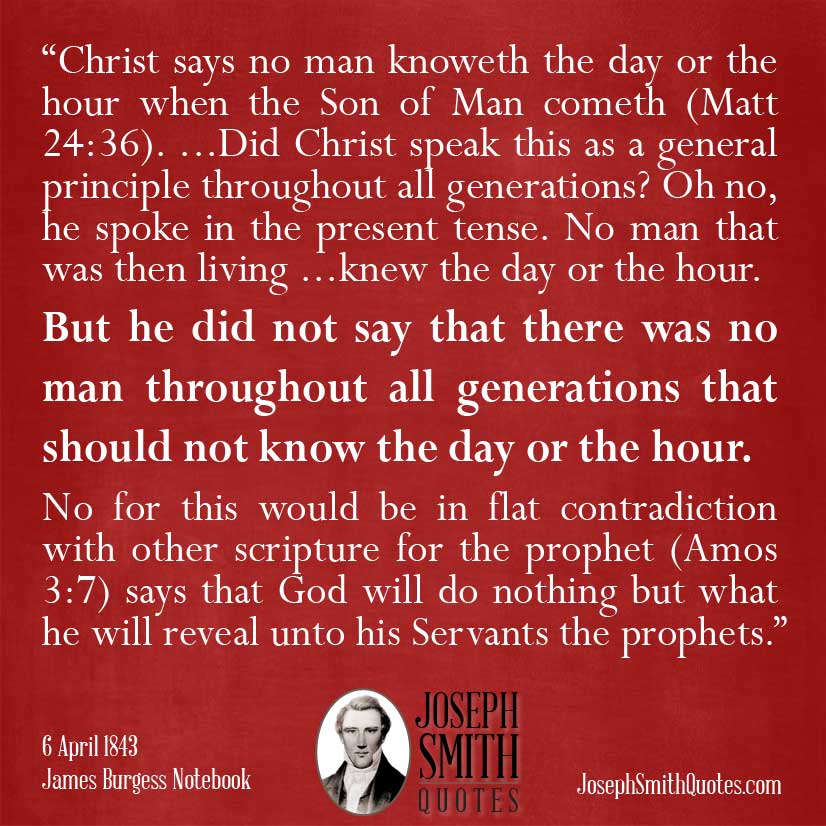 Christ says no man knoweth the day or the hour when the Son of Man cometh (Matt 24:36). …Did Christ speak this as a general principle throughout all generations? Oh no, he spoke in the present tense. No man that was then living upon the footstool of God knew the day or the hour. But he did not say that there was no man throughout all generations that should not know the day or the hour. No for this would be in flat contradiction with other scripture for the prophet (Amos 3:7) says that God will do nothing but what he will reveal unto his Servants the prophets.Joseph Smith

Why I picked this Quote?

I found this quote fascinating because until reading it, I had always thought that no one would ever know the precise day or hour of the second coming in advance. But Joseph Smith here makes it clear that that was not what Jesus Christ was saying in Matthew 24:36.

Throughout my life in the Church, it seems like there have been countless Sunday School and Priesthood lessons where Matt 24:36 was quoted as proof that no one would know exactly when the second coming of the Savior will be. I remember specifically my teacher in a Brigham Young University (BYU) religion class citing the scriptures and telling us that if anyone ever claimed to know the timing of Jesus’ Second Coming, to run away from them because they were a false prophet.

Joseph Smith, on the contrary, says that the Savior was speaking only of that present time. Joseph then goes on to imply that the prophets will know the day and the hour of Jesus’ coming, citing Amos 3:7 that God will do nothing without revealing His actions to the prophets.

On the other hand, if you look at the Doctrine and Covenants (D&C) section 49, a revelation received by Joseph Smith on May 7, 1831, the future tense is used to say that no man will know the day or hour of the Second Coming until it happens. Verse 7 says. “but the hour and the day no man knoweth, neither the angels in heaven, nor shall they know until he comes.”

This seems like it could be a contradiction in the teachings of Joseph Smith, but that verse in D&C 49 could be interpreted in a way consistent with Joseph’s 1843 statement. “Nor shall they know” could be a reference to the angels and not men. Or it could mean that men in general will not know or that fallen and wicked men will not know. But the statement may have no intention of excluding the Lord’s anointed prophets from knowing the day and hour of the Second Coming of the Savior Jesus Christ.

I guess you’ll each have to decide for yourself whether to believe it is possible for someone to know the day and hour of Christ’s coming.