Determined to Serve God at All Hazard 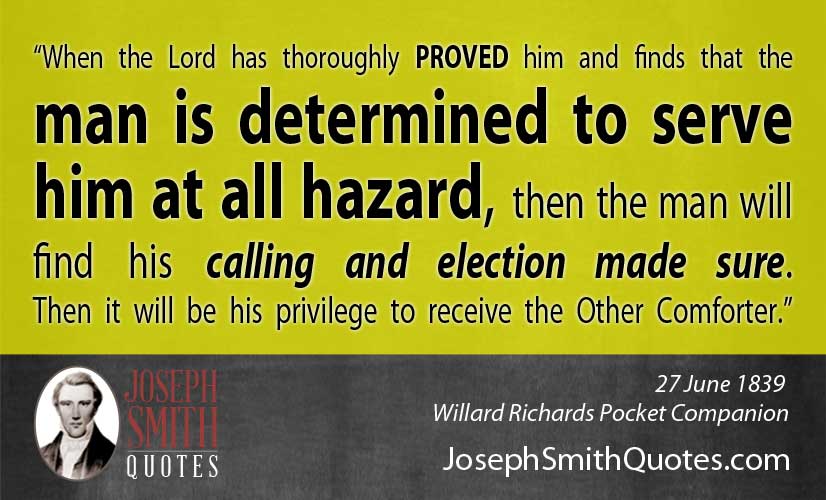 When the Lord has thoroughly proved him and finds that the man is determined to serve him at all hazard, then the man will find his calling and election made sure. Then it will be his privilege to receive the Other Comforter.Joseph Smith
Date: 27 June 1839
Source: Willard Richards Pocket Companion
The Words of Joseph Smith: Page 5

I love this quote because it gets right to the heart of the purpose of this life: to prove that we are determined to serve God at all cost. Or, as the Lord put it to Abraham, to “prove them herewith, to see if they will do all things whatsoever the Lord their God shall command them” (Abraham 3:25). And if we prove that we will obey all of God’s commandments and serve him, whatever the hazard might be, then we will have our calling and election made sure, and we will have the privilege of being personally ministered to by the Savior Jesus Christ, which is the Other Comforter or the Second Comforter referred to (See John 14:18-23 or D&C 130:3 or numerous statements from Joseph Smith defining the Other Comforter).

“After a person hath faith in Christ, repents of his sins & is Baptized for the remission of his sins & received the Holy Ghost (by the laying on of hands) which is the first Comforter then let him continue to humble himself before God, hungering & thirsting after Righteousness. & living by every word of God & the Lord will soon say unto him Son thou shalt be exalted. &c When the Lord has thoroughly proved him & finds that the man is determined to serve him at all hazard, then the man will find his calling & Election made sure then it will be his privilege to receive the other Comforter.”

It is also a little scary to think about this quote and its implications. What did Abraham have to do to prove he was willing to serve God at all hazard? He had to demonstrate his willingness to sacrifice his son Isaac (see Genesis Chapter 22, also D&C 101:4). Nephi’s experience where he was commanded by the Lord to kill Laban was also, perhaps, one of those Abrahamic tests (see 1 Nephi Chapter 4).

Perhaps much of the trails and tribulations that Joseph Smith went through were to prove he was determined to serve God at all hazard.

And if thou shouldst be cast into the pit, or into the hands of murderers, and the sentence of death passed upon thee; if thou be cast into the deep; if the billowing surge conspire against thee; if fierce winds become thine enemy; if the heavens gather blackness, and all the elements combine to hedge up the way; and above all, if the very jaws of hell shall gape open the mouth wide after thee, know thou, my son, that all these things shall give thee experience, and shall be for thy good (Doctrine and Covenants 122:7).

At many times, the very jaws of hell did conspire against Joseph and and combine to hedge up his way. He was tarred and feathered, he was unlawfully arrested time after time, he imprisoned in a cold dungeon and denied basic food and sanitation for months, and he was driven out of home and lands. Yet, the Lord confirms, it was all for his good.

I pray that I don’t have to go through that level of hazards to prove to God that I am willing to serve him and obey his commandments. But it is certainly the least I can do to show my determination to serve God by paying a full tithing, honoring my priesthood duties such as home teaching, dedicating myself to frequent temple service, and persevering to the end in all other ways in keeping my covenants.

P.S. For additional study on the topic of Abrahamic tests, may I suggest this fantastic BYU Devotional from October 12, 1971 by Truman G. Madsen called Power from Abrahamic Tests.