Support and Defend the Constitution 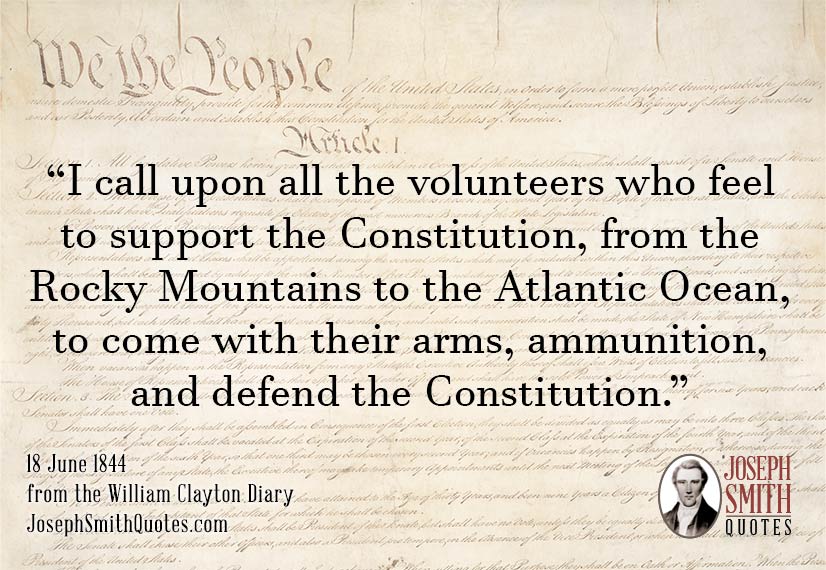 I call upon all the volunteers who feel to support the Constitution from the Rocky Mountains to the Atlantic Ocean to come with their arms, ammunition, and defend the Constitution.Joseph Smith

This is one of the last known public discourses of Joseph Smith. He would die at the hands of a mob a little more than a week after this, on June 27, 1844. Tensions were very high, as evidenced in Joseph’s words. In the prior weeks, angry mobs from nearby towns had gathered and begun to threaten the Latter-day Saints, infuriated by the destruction of the printing press of the anti-Mormon newspaper, the Expositor, by Joseph Smith and the Nauvoo city council. Joseph was also still fighting extradition to Missouri where he was wanted in connection with crimes he did not commit, charges he had been battling for many years.

Joseph believed he was innocent of any crime, and he felt he and the Latter-day Saints had endured the loss of many of the most basic rights guaranteed by the Constitution of the United States. Given the violence the Saints had suffered, the call to arms by Joseph seems understandable. William Clayton does, clarify, however, that “he urged them in strong terms not to shed innocent blood.—not to act in the least on the offensive but invariably in the defensive.” For more information, Chapter 44 of Saints, A Lamb to the Slaughter has a great explanation of the events of this time period.

This quote was written down by William Clayton in his diary, dated 18 June 1844. It describes a meeting on a Tuesday afternoon at the Frame Building near the Mansion House. The diary states, “After Phelps got through General J. Smith addressed the multitude. He briefly explained the object of the mob and showed that they waged a war of extermination upon us because of our religion. He called upon all the volunteers who felt to support the constitution from the Rocky Mountains to the Atlantic Ocean to come with their arms, ammunition & defend the constitution. He called upon them as the Lieutenant General of the N. L (Nauvoo Legion) and Illinois Militia in the name of the Constitution of the U.S., the people of the State of Illinois, and the citizens of Nauvoo.”