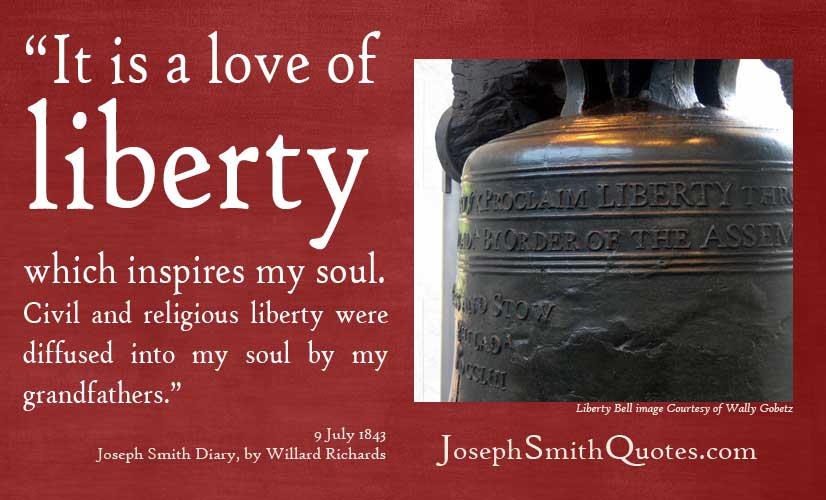 It is a love of liberty which inspires my soul. Civil and religious liberty were diffused into my soul by my grandfathers.Joseph Smith
Date: 9 July 1843
Source: Joseph Smith Diary by Willard Richards
The Words of Joseph Smith: Page 229

Why I picked this Quote?

Like Joseph Smith, I love liberty, both religious freedom and civil liberty. A major tenet of the Mormon religion is agency, or in other words that God has given us the ability to choose and to act for ourselves. Mormons believe that God honors his children’s agency and will not force them to Heaven or Hell. Each person’s eternal destiny is determined by the choices he or she makes. If we choose to repent and follow the Savior, the Atonement of Jesus Christ makes it possible for us to be cleansed and return to live with God.

Joseph Smith had ancestors, such as the pilgrims on the Mayflower, that came to America seeking religious freedom. Joseph’s ancestors were from New England and lived during the American Revolution and were involved in many of the events leading up to the formation of the United States of America. Joseph’s maternal grandfather, Solomon Mack, served in the army during the American Revolution, something which he and his mother Lucy took great pride in. (see Joseph Smith’s New England Heritage)

Further context shows that Joseph loved liberty, not only for himself, but also for all his fellow beings. He, in fact, in this same speech, said he was “ready to die for a Presbyterian, a Baptist, or any other” to protect their religious and civil liberty.

Here are some scriptures, all brought forth from God by the hand of Joseph Smith, which further explain freedom, liberty, and agency as understood by Mormons: