An Itching Disposition to Display Their Oratory and Witticism 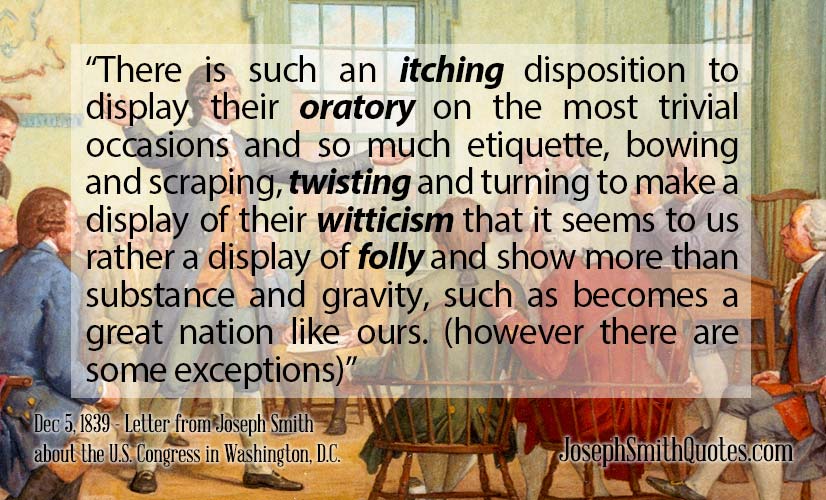 There is such an itching disposition to display their oratory on the most trivial occasions and so much etiquette, bowing and scraping, twisting and turning to make a display of their witticism that it seems to us rather a display of folly and show more than substance and gravity, such as becomes a great nation like ours. (however there are some exceptions)Joseph Smith

More About this Quote

At the time of the writing of this letter, Joseph Smith had been in Washington D.C. for several days. He had gone there to petition the President, Senate, and Congress to help the members of The Church of Jesus Christ of Latter-day Saints who had been forced out of Missouri earlier that year under that state’s extermination order. Many of the Saints had been murdered, and almost all had lost their homes and other property. Joseph met personally with President Martin Van Buren to ask for justice, but the president declined to help, saying, “I can do nothing for you,— if I do any thing, I shall come in contact with the whole State of Missouri.” Basically, Van Buren was saying if he helped the Saints he would lose the Missouri vote, which was something he didn’t want to risk.

Joseph then went to the U.S. Senate and House of Representatives, to see if anyone there would help him. He had about the same amount of success getting Congress to help as he did with the president–none. He spent several days in Washington and apparently had the opportunity to view many of the congressmen in action, which is where this quote comes in. He witnessed the “itching disposition” of our congressmen to show off their oratory skills and wit. Yet the speeches were hollow and lacking any “substance and gravity” as shown by the fact that they wouldn’t help right a great wrong that was happening as the Latter-day Saints were being robbed of their Constitutional rights to life, liberty, and property.

I also thought the quote was a great description of our politicians in Washington today, “bowing and scraping, twisting and turning to make a display of their witticism” but ultimately making a “display of folly and show more than substance and gravity.” And as Joseph Smith said, though “there are some exceptions”, such politicians with integrity are rare and it makes me wonder what will become of “a great nation like ours.”