I Will Never Vote for a Democrat Again 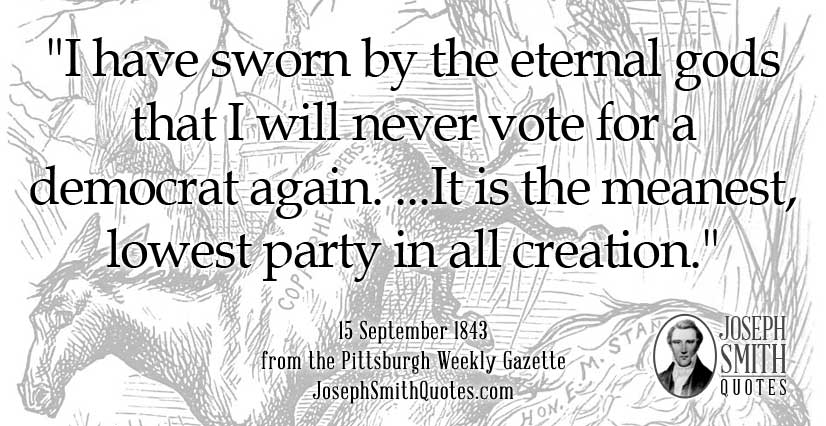 I have sworn by the eternal gods that I will never vote for a democrat again. …It is the meanest, lowest party in all creation.Joseph Smith

Where I Found this Quote

I first heard this quote during a FAIR Mormon conference talk in 2017 by Gerrit Dirkmaat called Lost Teachings of the Prophets: Recently Uncovered Teachings of Joseph Smith and Others from the Council of Fifty Record. I immediately wanted to use it on this site, but with only one source, I thought it better to verify the quote’s veracity before publishing it here. I did an internet search and was able to find transcripts of miscellaneous Pennsylvania Newspapers from 1842 to 1843. Among them, I was able to find the 15 September 1843 Pittsburgh Weekly Gazette which provided a second witness for this quote by Joseph Smith. I’m not sure if Joseph ever confirmed the accurate transcription of the conversation as recorded by the newspaper, but in my amateur historian opinion, it sounds authentic.

Why I Selected this Quote

There are several reason’s why I share this quote. First, it’s funny for a variety of reasons. Modern day Republican party members will no doubt find it amusing if they feel the same way as Joseph. Modern day Democrat party members will also, hopefully, find it amusing and quaint. Even in the context the quote was given back in 1843, it was part of a clearly jovial and light-hearted conversation which you can see in the greater context below. That’s not to say that Joseph wasn’t serious about this statement. I think he was sincere in his vow and his dislike of Democrat party politicians (and most other politicians, for that matter).

The quote is also very revealing of Joseph Smith’s personality as well as insightful regarding the things he and the early Latter-day Saints had to deal with. This quote was made less than five years after Joseph and the Latter-day Saints had their homes burned, their property confiscated, and were forced to leave the State of Missouri under threat of extermination. Government leaders had been complicit with these crimes and/or refused to redress the issues, as was the case with US President Martin Van Buren, a Democrat. Joseph and the other Latter-day Saints had tried for years to have the government address these grievances, but to no avail. Joseph Smith’s frustration with the government’s inability to defend their Constitutional rights was beyond frustrating and his displeasure with the politicians clearly comes through in the conversation reported by the newspaper.

Today, The Church of Jesus Christ of Latter-day Saints maintains neutrality in matters of party politics. “The Church does not endorse, promote or oppose political parties, candidates or platforms.” However, “The Church does encourage its members to play a role as responsible citizens in their communities, including becoming informed about issues and voting in elections.”

But the Church wasn’t always politically neutral. In the early days of the Church, when Joseph Smith was Church President, he was often vocal about where he stood regarding politicians and political parties. Though it should be noted the Joseph said, “With regard to elections, some say we all vote together and vote as I say. But I never tell any man how to vote or who to vote for.” Joseph clearly wanted each voting member of the Church to make up their own mind, use their agency, and vote for who they thought would be the best candidate.

This quote from Joseph Smith is part of a letter written by the Pittsburgh Gazette Editor, David Nye Waite. Mr. Waite visited Nauvoo in August 1843 and spent some time with the Prophet Joseph Smith. They spoke about many things such as Joseph Smith’s first vision of God the Father and Jesus Christ, as well as the temple the Saints were building in Nauvoo. At one point the conversation turned to politics, and this is what Joseph said:

“I am a Whig, and I am a Clay man. I am made of Clay, and I am tending to Clay, and I am going to vote for Henry Clay; that’s the way I feel. (A laugh.) But I won’t interfere with my people, religiously, to affect their votes, though I might to elect Clay, for he ought to be President. I have sworn by the eternal gods — it’s no harm to swear by the gods, because there is none; if there is only one God, there can’t be gods, and it’s no harm to swear by nothing. (a laugh) — I have sworn by the eternal gods that I will never vote for a democrat again; and I intend to swear my children, putting their hands under the thigh, as Abraham swore Isaac, that they will never vote a democratic ticket in all their generations. It is the meanest lowest party in all creation — There are five-sixths of my people so led away by the euphonious term “democrat,” that they will vote the Locofoco ticket. I am a democrat myself. I am a Washington democrat, a Jefferson democrat, a Jackson democrat, and I voted for Harrison, and I am going to vote for Clay. The Locofocos are no democrats, but the meanest, lowest, most tyrannical beings in the world. They opposed me in Missouri, and were going to shoot me for treason, and I had never committed any treason whatever. I never had any thing bigger than a jack-knife about me, and they took me prisoner of war, and had twenty men to guard me. I had nothing to do with fighting.”